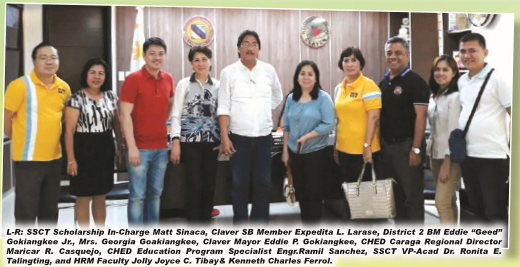 Plans are underway to open an SSCT Extension Campus in Claver following the request of the local government unit of Claver headed by Mayor Eddie P. Gokiangkee who said that he wants to equip his constituents with the competitive educational advantage for them to avail of the employment opportunities offered by mining companies in the area.

SSCT President Gregorio Z. Gamboa, Jr. also welcomed the intention of Mayor Gokiangkee citing the need for SSCT to respond to the needs of the community in terms of providing quality education.

CHED Caraga Regional Director Maricar R. Casquejo, also met with Mayor Gokiangkee to discuss the the proposal and to go over the plan for the said extension campus. Dr. Casquejo was accompanied by SSCT Vice-President for Academic Affarirs Dr.Ronita E. Talingting and other SSCT faculty.

Dr. Gamboa in the meantime said that the plan for the Claver extension campus would still need the approval of the board of Trustees and the confirmation of CHED.

Should plans materialize, curricular programs that would initially be offered in the Claver extension campus would be BSED, BEED, Hotel and Restaurant Management, and Civil Engineering.